China’s central bank has announced that all crypto-related transactions and services are now illegal. In response, Bitcoin drops down to $41k from $45k.

China Announces All Crypto Transactions And Activities Are Illegal

As per a report from Bloomberg, China has intensified its crackdown on crypto and Bitcoin as the nation’s central bank says all digital currency transactions are illegal.

According to The People’s Bank Of China (PBOC), not only are Bitcoin, Ethereum, and others unrecognized as legal tender, any services related to them are also illegal.

These crypto services include derivatives trading and exchange services provided by foreign firms to the country’s residents.

The report also says that the nation considers cracking down on miners an urgent priority in order to meet carbon goals.

China has already been at work cracking down on crypto and Bitcoin mining since the second quarter of 2021. Regions like the miner hub of Sichuan have been targeted by the government in the last few months.

These mining crackdowns earlier caused the world BTC hash rate to collapse as most of it resided in the country. Though, since then, miners have relocated to other nations and the hash rate has kicked back up.

Bitcoin’s Price Tanks $4k In Response To The Statement

At the time of writing, Bitcoin’s price has slipped down from $45k all the way to $41k, almost a 9% decrease over the last 24 hours.

Here is a chart showing the trend in the price of the coin today: 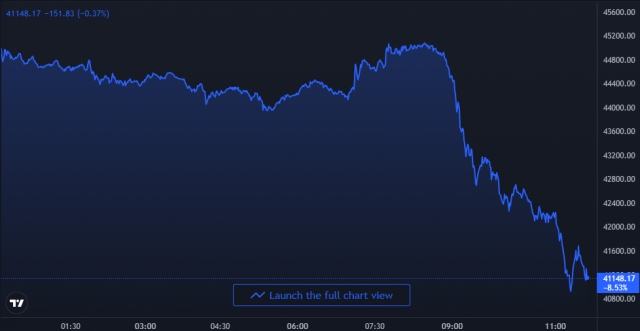 As you can see in the above chart, BTC had recovered to above $45k after a crash below $40k a few days ago, but as soon as China released the statement regarding crypto transactions and activities being illegal, BTC’s price tanked in response.

The coin’s value is down around $4k right now, but it actually went down to as low as $40.9k before making a small recovery to the current $41k level.

BTC’s price plunging in response to China’s crackdowns isn’t a particularly new thing. Earlier in the year, the crypto had an almost 50% crash after the nation reiterated its ban on digital currencies and mining.

It’s unclear at the moment if the coin will go even further down in response to the ban or if the $4k drop was it for this time.

The Crypto Top 20 Looked Very Different In 2017, Will Your Fav Projects Still Be Relevant In 4 Years?